Pretty much everyone is familiar with yeast infections when it comes to women, but few people know that men can get them too. In fact, male yeast infection is one of the several most common things that is mistaken for genital warts. That’s because in the early stages of development, the yeast infection can have a red rash-like appearance that could even form some small bumps.

Symptoms of male yeast infection include:

— a red, rash-like area that usually itches, most likely somewhere on top or just below the penis head
— the penis can appear red and swollen
— the penis foreskin can start to feel “tight”
— if you let it get too bad, it can become painful and even cause some nasty discharges… that’s why it’s important to not let this go on for too long after you’ve identified it

Male yeast infection can appear very quickly after sex – sometimes even as quickly as a few hours. After a day or two, it can develop further into lots of redness and even some bumps. It’s at this point where guys usually freak out and start thinking it’s warts.

Once you start to develop any of these signs, DON’T just ignore it and think it’ll go away if you give it some more time. It won’t. If you let this go on for too long, the itching will get worse and worse to the point where you can’t even sit down and watch TV without the itching and burning driving you CRAZY! If you leave it for even longer than that, it can develop into a case of phimosis, which will bring a LOT of pain and make it hard to urinate. It is very important to recognize this early on and start a treatment as soon as possible.

A bad case of male yeast infection won’t just go away on it’s own!

Back when I had a mild case of this, I started back at square 1 with what I knew about treating various sin conditions, including genital warts. So I started with what I knew and, luckily, I discovered that method #1 in my report works surprisingly well on early stage male yeast infection. If you catch it early enough, this will definitely allow you to stop it from growing out of control into something awful. So even though my report and video I offer is for treating genital warts, there is a small amount of overlap in treating some closely mistaken skin conditions such as yeast infection.

Yeast thrives in warm, moist conditions and the area under your foreskin is the perfect area for this fungus to grow. That’s why it’s VERY important to always keep the area very clean during the treatment process, and it also helps a lot to wash yourself immediately after having sex. Washing the foreskin area very thoroughly after sex can help prevent the situation from getting out of control, but you will still need to perform an actual treatment on it. Washing alone will not clear it up.

Start by cleaning your penis with a mild soap while running a lot of water over the area. Be sure to DRY YOURSELF VERY THOROUGHLY after bathing or any other time the area might get wet. And when I say “dry” I mean REALLY DRY, not just rubbing a towel over it and calling it good. You need to either let the area air out naturally or to speed up the process, use a hair drier until there is no moisture left on the penis or under the foreskin area.

All of these steps are extremely helpful in limiting the spread of candida in men and even help prevent the major outbreak from even happening in the first place.

There is an additional risk for you getting a male candida infection or male yeast infection if you are diabetic. When you pee and don’t clean up thoroughly, the high sugar content of your urine provides an excellent food source for candida yeast to gain a foothold and grow from there. Again, keep the area extra clean after peeing and you will avoid this potential hazard.

Injuries to the penis, including small tears or cuts in the foreskin from sex) can spread yeast infection like there’s no tomorrow. If your partner has excessive dryness during sex, use some kind of water based lubricant to minimize the damage done to your penis that could cause a yeast infection to spread and get out of control fast. This lube issue might not seem serious to a lot of guys, but the friction generated from under-lubricated sex can set up the opportunity for yeast infection to develop.

One of the most common ways guys get male yeast infection is from infected women who have dormant yeast. It might not be a problem for THEM, but it will become your problem FAST after unprotected sex with this person. If you have a regular sex partner, it is always best for both of you to follow a yeast infection treatment at the same time (such as method #1 in my Genital Warts Formula). That way, you won’t be passing your male yeast infection to her and she won’t spread her female yeast to you.

Over the years I’ve slowly built up a collection of male yeast infection photos to more clearly demonstrate this issue so more guys can identify the problem before it gets out of hand and do something about it. If you’re unsure about what you might have, I am providing some photos here, on my main genital warts pictures page, and in addition to all of that I can also help you personally if you contact me directly. 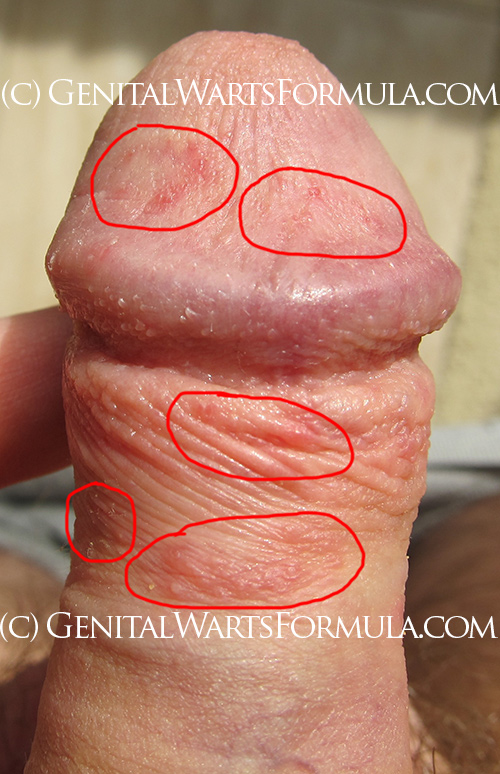 The photo above is of male yeast infection at a VERY EARLY STAGE – only 1 or 2 days after sex. I have circled the abnormal red spots that shouldn’t be there. The red bumps in the bottom circle are clustered together, which is a formation that is often confused with genital warts. Molluscum contagiosum can also first take on the appearance of those bumps in the bottom circle. 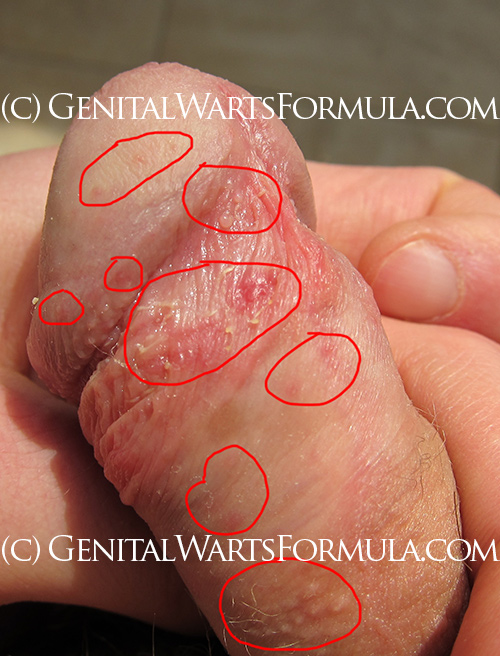 Here is a picture underneath the same penis as above. Again, I’ve circled the main parts of interest where the male yeast infection has started to take hold. And keep in mind this is only within 48 hours of sex with a female who had a yeast problem.

This picture is a good example of what a male yeast infection can develop into when it’s left untreated for too long. This is very painful and there is no reason to wait around at this point. Get it treated now. Method 1 in my report should clear up the beginning stages of yeast infection within a few short days. However, something this advanced like in the photo above and the ones below would certainly take longer.

This is what can happen to the shaft area when male candida gets hold and is left untreated for long enough. A case like this would take considerably longer than a few days to clear up, but you would experience a lot of relief from the pain and itching and irritation within 24 hours.

This picture is a more advanced stage of male yeast infection from the first two – you can clearly see how the small rashy areas have developed into a large raw area that hurts and itches. Out of all the photos above, this one would take the longest to clear up and get back to normal again. Don’t let it progress this far, ever.

The main point of all this is: if you have sex with someone and soon after start to feel the characteristic itching and irritation and red spots – it could be male yeast infection coming on. Don’t wait – it won’t get any better on its own. Start a treatment immediately. I personally recommend method #1 in the report I wrote on genital warts, because it’s cheap, easy to do, and very effective against this condition. (however when I originally wrote about it for warts, I was unaware of this fact until it was tested later on many types of people)

Also, after you treat a yeast infection with method 1 enough times, it will eventually go away and not come back at all unless you have sex again with the same woman or another who also has a yeast issue. That’s more than I can say for a lot of the over-the-counter treatments out there, which are often ineffective and take over a month to show any results if they work at all.